This is my fifth article reporting God’s answer to our prayers for our neighbors.  First was,  I Prayed For My Neighbors, Look What Happened  then, I Prayed For My Neighbors….Part II    thirdly, When God Allows Defeat  and fourth – When God Allows Defeat…and Confusion.   Yes, our hopes were totally deflated on June 26th, when enough of our neighborhood representatives betrayed us and stood by Columbia University to expand their campus.  The large community opposition – working folks, seniors, single parents and youths, shuffled out of the forum, battle worn.

While CU calls it a ‘pedestrian plaza for the community’ (even though the community doesn’t want it) their reputation of trampling into neighborhoods and seizing land goes before them.  Shutting down part of our street, gnarling traffic, adding to our parking crisis – enlarging their ‘footprint’ –  is not good for us, it’s good for them!   Their actual plan was uncovered, 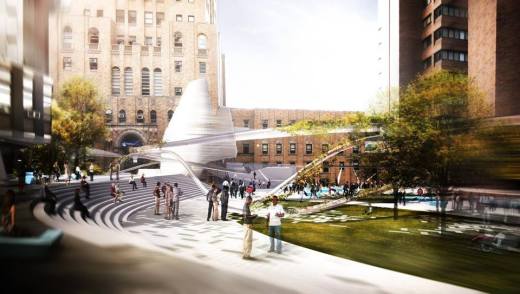 This is their private rendition of our street.  Notice, no cars…and no residents!  But the Lord, “catches the wise in their craftiness, and the schemes of the wily are swept away.”  (Job 5:13)

Our core group kept digging, finding more devious political connections and power exerted by Columbia University.  My husband and I kept praying.  Was this over?

Two days after the June 26th defeat, I was doing my laundry in the basement, lamenting a bit until a fire got in my bones, “Hey, maybe we did lose, but I’m writing to the newspapers!” Folding the last sock, I dashed up to my computer and tapped out this letter:

Columbia University once again triumphed over the residents of NYC. After demolishing apartment buildings and evicting small businesses on Haven Avenue, this week they claimed victory in their fight to close blocks of our street. Their campus expansion, described in their Columbia Medicine Journal, morphed into a ‘pedestrian plaza’ to somehow make it palatable.

The residents in this Washington Heights neighborhood are not fooled. They fought Columbia’s self-enlarging plan in Nov and Dec last year. Due to public outrage and the detriment of street closure, the Community Board voted against it in December 2017. However, in May and June this year, somehow this plan mysteriously appeared for another vote.

That Columbia paid for their own ‘traffic study’ is the fox pointing to his tail, “Here is my witness”!

Councilman Ydanis Rodriguez, a lame duck beholden to Columbia, strongly championed this campus expansion and did so right in front of his outraged constituents. Paid lobbyists circulated through these meetings to secure the final vote. The public was essentially disavowed.

We invite anyone to see how closing blocks of Haven Avenue for “students to sit and have a cup of coffee” is a traffic and parking nightmare in this congested medical and residential neighborhood.

Shame on you Councilman Rodriguez for betraying your community! Shame on the many Community Board members who turned their face from their neighbors!  Shame on you, Columbia, my alma mater, and all your mega donors who compete to get their names on your conquests!

Well, that went out to all the NYC papers.  Even defeated and deflated, I sensed a real unction to somehow go forward. Within one day I heard from a large community newspaper – they contacted our core group and sent a reporter out!

On July 1st the NY Daily News printed an edited version of my letter.  On July 11th The Manhattan Times printed a 3 page article with photos!  At first this was fabulous until we took a closer look….no mention of community betrayal or Columbia’s conquests – no mention of the big picture plan that would consume more of our neighborhood.  It was a ‘safe’ article, stepping on no one’s toes…

THEN this week one in our group got a call from the New York Times!  After interviewing us by phone,  the reporter and photographer came up to Haven Avenue for full scale walking/talking tour.   He gave us over two hours of attention – seemingly familiar with Columbia’s West Harlem takeover several years ago.

My heart recalled Pastor Dave Wilkerson’s preaching on ‘death of a promise’.   He taught that, when God promises or plans something, He often ‘puts it to death’ – eliminating the possibility of man claiming victory.  Abraham’s promise of a son was ‘put to death’ as they were incapable of bearing children – God alone brought it to pass.  Moses’ 40 year exile,  Joseph in prison…all circumstances of ‘defeat’ awaiting the hand of God.

Is the Lord moving here, rising up to confound the unbelievers – and believers as well?  I  steadfastly pray for those who betrayed and disavowed us – may the Lord quicken their conscience and convict their hearts – take away their false peace – and lead them to repentance!

Praying that the Lord be high and exalted, may our neighbors see that He is living hope, even when all seems lost.  May our group truly say, “only God could have done this!”, and acknowledge Him.

There is a truth, not quite a Bible verse, but demonstrated throughout scriptures, which I keep pressed in my heart.  Of the Lord,

“He takes personally every act of dishonor as well as every act of kindness done to His disciples.”   (from Safely Home, by Randy Alcorn)

This should grant us great assurance – and pity for our enemies.

Please pray for a New York Times article!  Thank you!

11 thoughts on “Defeat and Confusion – Lord, Press On!”