After a lengthy time of praying for our neighbors, my husband and I stepped into a neighborhood battle as Columbia University fought to close down blocks of our street for their campus expansion.  United with neighbors, whom we had never before met, we fought to keep our street open and, in December 2017, we won! 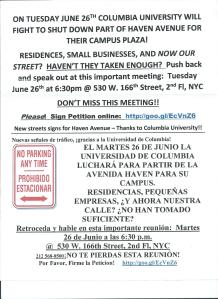 My husband and I once again worked diligently with our neighbors to organize and reach out to the neighborhood and Community Board members.  We were able to share our faith and, honestly, I truly hoped that a victory would be opportunity to openly praise God!  At one point, we learned that a high appointed city official is a brother in the Lord.  He assisted and encouraged us greatly.   When this became known within our group, the leader said, “Although you and I don’t share the same faith, I have to agree, this is a divine appointment!”

We were ready to exalt the Lord upon our victory on June 26th!

On that date, I gave a presentation to the Board and before community members, as did several others, highlighting again the indisputable issues against closing our street.   However, in the end, our city Councilman rose up and championed the plan of CU.  I did not know that this councilman appoints half of these Board members and determines their ongoing service!  CU lobbyists also circulated to ensure votes.

No matter!  If God intervenes, victory is ours!

But we lost.  Our elected official betrayed his constituents…as a ‘lame duck’ he is undoubted beholden to CU for some position.  Not all, but enough Community Board members turned their face away and approved CU’s plan.

Entering this battle was not an impulsive act, we prayed and continued to pray throughout the process.  While we are not called to ‘fight the world’, we are called to love our neighbor.  Truthfully, we never knew these neighbors, only working alongside them did we come to have love for them.

Defeated?  “Defeated” was prematurely written over Joseph’s prison cell, Daniel’s lion’s den, over all of Paul’s life threatening attacks…..“Defeated” could have been posted over Christ’s tomb!  But GOD holds the victory for His people for His glory – how He chooses to establish that victory is His divine providence.

Confused?  God does allow confusion and upheaval….disappointments and loss.  None of us are exempt, even beloved spiritual hero John the Baptist asked Jesus from his cell,  “Are you the One who was to come…?”  Confusion brought me to my knees,  crying out to the Lord, for His supernatural peace and clarity.

I deeply lamented after that vote – but not for my street!  To literally witness bold betrayal of officials and grassroots representatives dismissing their oaths to serve – caused me to weep.  Many of them gathered around CU executives with smiles….as the residents put away their signs and hung their heads.  So shameful! When did their conscience drop dead?

Our group leader came up to me and my husband, “One good thing came out of this – I came to know you!”

Some are already rising up to pursue opposition to the Board’s vote.  There are ways, but my husband and I agree – we will not continue without God’s leading.  If there is no eternal value within this work, “Lord, count me out”.

All I know is this:  We prayed for our neighbors – even though we hardly knew them!  God engaged us in a battle, we came to know them and develop a true concern and love.

God allows “defeat” – but that’s never His last word!  He allows “confusion” – to draw us nearer to His heart, to receive His peace, His clarity.

May the Lord encourage us all in these last days, to walk in His shadow and keep the faith – no matter how defeated and confusing our circumstance seems.