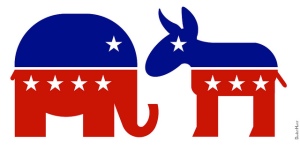 We, as a people and nation, are in a different place than we were eight years ago. Without delineating the prevailing issues, it is enough to say that the church has become increasingly irrelevant except where it is seen as a voting bloc. Data bases of megachurches reveal clusters of thousands in the US and an unknown vast number of smaller community churches. When has so many people had such little impact at such a critical time?

Even worse, the churches ‘call to action’ amounts to courting political candidates whose views may be somehow contorted into a moral or religious framework. Christian colleges, ministries, media programs, and countless churches rally around a prospective president as if he or she could be a mini-savior, representing Christian viewpoints to our country. As citizens it is our right to vote. However, wooing worldly men to represent godly views is fruitless. The Lord saves us and calls us to represent Him ourselves – to abdicate this holy call to anyone else, to a politician, disqualifies us in the race.

Why coddle candidates or strategize campaigns? Be assured, God Himself has chosen a candidate and no one will thwart His plans.

“No one from the east or the west or from the desert can exalt a man. But it is God who judges: He brings one down, He exalts another.” Psalm 75:6-7

Sovereign God raises up prophets, kings, pharaohs and presidents. He uses the godly and wicked to serve His divine purposes: one to proclaim God’s truths that will ultimately reconcile man to God, the other to display His glory, His power and as His rods to chastise and refine, also to reconcile man to God. God declared to Pharaoh, the enemy and enslaver of His people, “I have raised you up for this very purpose, that I might show you My power and that My Name might be proclaimed in all the earth.” (Exodus 9:16)

Rather than ‘picking up our cross’, American Christianity espouses a worldly mixture of faith:

Not only do these tenets bear bad fruit in our lives but worse, we export them to other countries through various prosperity ministries. If God loves us, if He is calling us and drawing us to Himself, He may raise leaders and circumstances that will set fire to our lukewarm floundering faith. After years of godly warnings, God raised up Nebuchadnezzar, King of Babylon, to invade and desolate Jerusalem as a painful rod of chastisement to crush the unbelief and unfaithfulness of His people. His heart was to restore them as faithful to Him, separated from this world.  While as good citizens we may defend and protect our fellow citizens, prideful allegiance to any country, any world system or ‘way of life’ is adultery toward God. Except for the prophetic promises for Israel, God is not ‘for’ any country. Sad to state, God is not ‘for’ America.

And, sad to state, America is not ‘for’ God. As all the world, it will voluntarily come under the domain of the Antichrist. What is of great and eternal worth to God? God’s people, true believers, are His treasured possession – He will defend us, protect us, and endow us with His presence wherever we are.

Who is God’s presidential candidate?

It is not the one who passes the ‘Christian Value Litmus Test’. We cannot try to elect a president to ‘sanitize’ or ‘Christianize’ the United States. Believers are not called in any way to pump life into this condemned world, to make America great, bolster the stock market, or champion civil liberties. Jesus said, “My Kingdom is not of this world.” Do we believe Him?

God’s candidate may unknowingly hold a powerful unspoken promise, “Vote for me.  I will bring about the chastisement and discipline of God. Under my leadership, you will be brought to your knees, crying out to Him!” God may ordain the leadership and circumstances that shake us and bring us prostrate before Him: calamity, economic downfall, the uprising of enemies, natural disaster.  The Lord’s only campaign is for men to turn to Him and find eternal life and forgiveness through the cross of Christ.

Beloved, the alternative to God’s painful discipline is not prosperity, it is abandonment.

The Lord has already chosen His candidate and no amount of campaigning will change that. He Himself erects authorities in the world and they will suit His eternal purpose and fulfill the expressed prophecies of His unchanging word. I pray that we are not in the least swayed by political promises or put our hope in any man.  Pray that the Lord’s ordained candidate and circumstances miraculously and mercifully lead our nation into repentance. The fearful alternative is that God ushers in a president that sustains our implosion of sin and fortifies the lie we have been living, that we can sin and get away with it and by the way, there is no such thing as sin. A prelude to coming Judgment.

It’s time for us, GOD’S ELECT, the Body of Christ, to rise up and take up our office in Christ, shut in with Him and come forth with a fresh and living word to restore and renew our lost nation.

“No one is like You, O Lord; You are great, and Your name is mighty in power. Who should not revere You, O King of the nations?” Jeremiah 10:6-7

2 thoughts on “God’s Candidate Will Win”