Trials and tribulations are not giants, neither is a tumultuous storm. You will know a giant firstly by the fruits of his intimidation. Personal and deliberate, a giant arises and challenges us, often during times of calm and complacency. Like a snake bite with stored venom, a giant can surprise us with hostility.

Giants threaten to corner us….

When interference and confusion, even aggression, stand against us in our workplace, our marriage, our home, or ministry – a restrained enemy is allowed by God, even raised up and unleashed by God, with great purpose. It is God who leads us right into the battle. In doing so, the Lord sets the perimeters, determines the outcomes, and reveals Himself as defender and deliverer, One who will not fail those who trust in Him.

This truth is personified throughout Biblical accounts as God’s people, often at their weakest, must confront enemies with disproportionate strength, power, and arrogance. Moses, an elderly shepherd, became the perfect pick of God to confront an oppressive world power (Exodus 3). Unwilling and intimidated, Moses was led to the giant, surrendering to God’s supernatural power and purpose which infamously demonstrated:  no earthly or spiritual power can prevail over the weakest vessel led by God.  Later, in Numbers 13, as God pointed the Israelites to their promised land of abundance and beauty, we see the Israelites defeated by their unbelief, cowering in the shadow of giants. Their unfaithfulness slandered God as insufficient and the barren desert thus became their grave. Only Joshua and Caleb rightly gauged the power of God and gained the victory. And who, of any faith, hasn’t heard of David and Goliath?

Whether the battle consists of gigantic opposition or deceitful calculated attack, Satan instigates and influences those around us to intimidate and harm us personally, robbing our peace and confidence and stirring up flurries of fear and anxiety. Giants come with an aura and, after an initial sting, they will find any means to enlarge the threat and overshadow the arsenal of strength we have in the Lord. What is the true target in these attacks of harassment, intimidation, unprovoked hostility and slander? By raising up our flesh and weakening our faith, we become useless to purposes of God, we may lose God given ground in our life and, ultimately, dishonor the glory of an unfailing God.

And God unleashes, leads us to, such an opponent? Why?

God declared to Pharaoh, “…I have raised you up for this very purpose, that I might show you my power and that my name might be proclaimed in all the earth.”  And God, who does not change, stands ready to show Himself strong on our behalf to deliver us when, not if, attacks come upon us.

Spiritual battles target the heart and soul of the believer…and God allows them to do so. Satan inspires with a  tool box of deceit, slander, unprovoked hostility,malice, confusion and division.  When attack  comes and threatens to apprehend the God given ground in our lives, there are three possible strategies to pursue.  Firstly, we may retreat and suffer – grossly mistaking weakness, defeat and suffering for humility. Often we initially respond in the flesh, seeking support and sympathy, utilizing our own intellect, natural strengths and resources. The Lord reveals this maneuver as fleshly and futile, exalting self and disavowing His lordship; He  may well use the battle to reveal in us the state of our heart,  flushing out pride and self-sufficiency.

The only recourse that defies and confounds the wiles of the enemy is total surrender – total surrender to almighty God. Resisting temptations to repay hostility and malice and guarding our heart against resentment opens a place for God to speak His living Word into our soul. We cannot see clearly under the enemy’s shadow but under the shadow of the cross is light, strength, and victory. Our cover in the battle comes from separation – committed times of prayer and fasting – communing with the Lord who longs to reveal Himself as our deliverer.

Pray for the giants, they have lent themselves to dark influences to oppose God’s sheep. May God confound them and bring them to shame, leading them to repentance on this side of eternity.  And may God woo us to that place of separation, of dependence and deep communion, of confidence when we face a giant…

“Do not be afraid or discouraged… for there is a greater power with us than with him. With him is only the arm of flesh, but with us is the Lord our God to help us and to fight our battles.” (II Chronicles 32: 7-8). 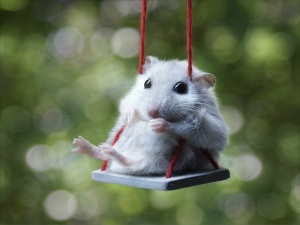 Freedom: the great reward of surrendering to God.